A good week ago, September 29th, I ran my eighth marathon. This was a very important goal for me, as I was told almost three years ago due to a leg injury followed by surgery that it would probably never be possible for me again. However, I did it and even set a new personal best.

In today’s article, I want to briefly introduce Einstein’s marathon as a run and summarize my run. Finally, I will say a few words about how I will continue and what my next athletic goals will be.

About Einstein’s marathon as a running event

Since there are not enough 700 starters for a marathon distance, the Einstein or Sparkasse marathon in Ulm is one of the somewhat smaller marathons. Starting and running alongside the relay team and the half marathon runners, the starting field still felt pretty powerful. 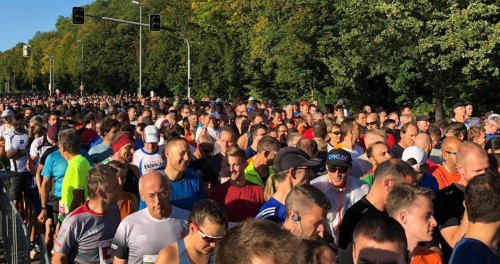 The event, which celebrated its 15th anniversary this year, was really well organized. For example, there were more than enough well-equipped food outlets. The crush on them was also limited. There were also many helpers and rescuers deployed along the route.

The route through Ulm, Neu-Ulm and Danube was mostly very calm. It is a little annoying that the sections of the route had to be passed twice. Several sections were also quite narrow. Marathon and half marathon runners start and run 21.1 kilometers here. From time to time it got a little tense and we had to overtake, avoid or brake in a small space to avoid colliding with other runners

Dual routing had the advantage that viewers had less distance they had to travel. The Spectator Factor definitely shouldn’t be underestimated on a run like this.

By the way, I still noticed the viewers very positively. Of course, far fewer people watched and cheered the runners than at the larger running events. To this end, isolated spectators really made an effort and drove alone (or in small groups) to distant sections of the route to cheer the participants.

Overall a pleasant event with a nice starting field that I can recommend to every runner.

A short description of my run

Conditions were almost perfect when the start of the marathon began shortly after nine o’clock. The sun was shining about 12 degrees and my legs felt very good. During the race, the temperature rose to about 20 degrees. The weather couldn’t be better for me.

Under these conditions, we started with a realistic target time of 03:45:00. From the very beginning, we have been guided by a pacemaker. However, it didn’t work consistently enough, so we overtook it after about 16 kilometers and ran after our watch.

Our split times were nearly perfect as planned. However, as can always be the case with such a long run, we had two or three small problems. For example, starting from the 21st kilometer, I started having problems with my left Achilles tendon and had to change my running style a little to make it easier. By the way, she did not forgive the barrel until today.

At the 30th kilometer it suddenly became really difficult, although we crossed it several times during training. When my running partner Katarina was caught with a hammer for 36 km, she wanted to give up in no time. However, I was able to convince them to continue. After all, we spent a lot of time for half a year and trained together to achieve this goal.

We slowed down significantly, but did not stop. After 03:49:24 we reached the finish line broken, but proud and happy. Even if it was slower than our target time, I am very proud of our time and work. Finally, it should be remembered that this was Katarina’s very first marathon, that I am probably a little more powerful than a running athlete, and that this was my first marathon after a long break from injury. 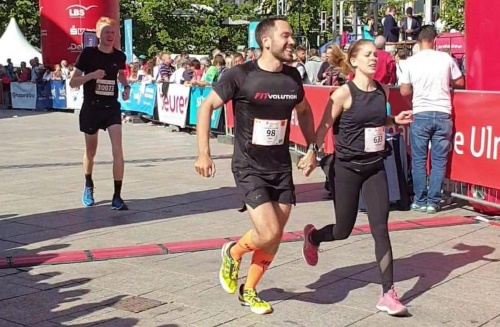 I would also like to take this opportunity to thank my training partner Katarina for training so consistently and finally running so boldly with me. I don’t know if everything would have gone so well alone, and it certainly wouldn’t have been so much fun.

What’s next? My next sport goals

Now some people are asking me what’s next for me. Of course, I also asked myself a question and thought about different things.

But first, I don’t want to put a lot of pressure on myself for a few weeks. The preparation for the marathon was very difficult and rigorous. Now I want to give myself a little more flexibility. This suits me well on my upcoming trip to the USA.

However, I’ve already wondered where I would like to set the next focus.

I have lost over 10 pounds since the beginning of the year. Much of this was, of course, bold and therefore absolutely planned. No matter how much I tried to maintain the muscles as much as possible, I still lost some muscles during the special training session. I lost a little more weight on my legs than I would like.

So, my next goal is to gain strength again. This also includes a significant increase in my strength, especially in the most important core exercises of the bench press, squat and deadlift.

I set myself a goal to gain another ten kilograms in the upcoming mass phase. Let’s see how close I can get to my old performance records.

I want to try to maintain my mid-distance run somewhat and start again in April at the Hanover Half Marathon. Maybe I can even beat my personal best for a half marathon at 01:44:17, set in 2016. That would be great, about eight kilos more than then.

In this regard, however, I am not putting any pressure on myself and am waiting to see my learning progress.

It was so far away from me for the Einstein marathon and my other goals for the coming months. I hope I was able to give you an interesting insight into the article.